Since The Blue Book Fugues, I have been reflecting on poetry in counterpoint. In music, this entails writing harmononies both vertically and horizontally, but my life is a dance through less explored strings. Rather than writing each poem in just two dimensions, what about making the structure itself symphonic? Is it possible to build multidimensional matrices of meaning, which adhere to the principle of inevitability? 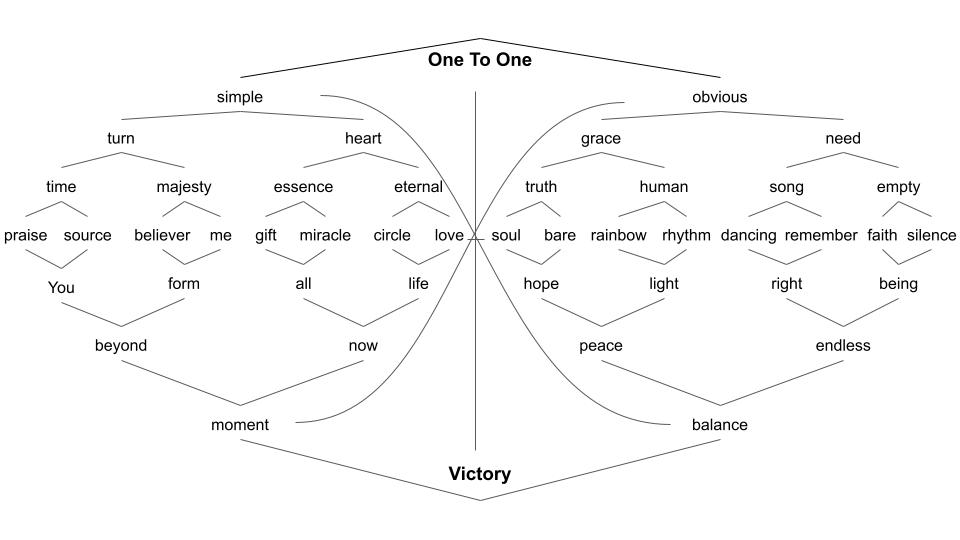 In short: yes. Internal links on this site are created by placing [[ ]] around a word that matches the file name to which you want to link. Dyeing The Blue Book also works like this, but has as many internal links as possible: a densely interconnected, overlapping labyrinth without any one, specific path through it. The intention is that any reader will be stripped of the idea that they can navigate through it coherently, much like death itself.

However, Unifying is about the simple victory of realising that there is only One, then honestly engaging with how that One manifests as endless twos so that you can - in the full light of lived experience - return to the One by will, pleased and well-pleasing.

Each poem only links to two others, at first. This creates a binary tree-like structure, spreading out through narrative search-space. However, all is One, so we must end back where we began. Our origin and destiny is a singular point. Therefore, in the middle we narrow the path, winding our way back to the Victory of having "moved" from One to One.

Importantly, love and the soul are not poems, but bi-directional musical bridges in between; ways of moving more easily from one side of the tree to the other.

It is possible to pen many poems from this counterpunctual structure, by following specific vertical paths:

A simple heart
contains the essence
of every gift.

All it is is
now, this moment:
pure victory.

Or by moving horizontally across each level:

Time just seems to be
the movement of a majesty
whose essence is eternal.

This truth is held
in every human
song: simply listen
to its empty space.

Or by any random walk you care to take, seeing as it is all ultimately connected. Feel free to use this structure as a prompt for your own work.

The image of Unifying's structure is still only two dimensional, though. What is not shown is its depth, i.e. the actual poem behind each file name which embodies an aspect of the total structure based on the angle (or perspective) implied from its unique position in the overall tree.

This depth is the third dimension in which one can read meaning. However, we experience at least four dimensions, so is it possible to make this structure reflect our reality more accurately?

Each poem - in addition to providing depth and body to the total structure - has three external links or "threads": one to The Blue Book, another to Living, and a third to Dyeing. Unifying is a skeleton key to the other three books, and the specific links it uses are its fourth dimension. It provides a means of reading each of the other books in a way not implicit in any of their own structures, and ties together many threads in and between them which may not have been obvious to anyone but the writer.

Unifying is a counterpunctual reader's guide to the rest of The Blue Book. "Counterpunctual" in the sense that it embodies meaning in many dimensions, and in that it acts against being on time. It is a key which exists outside time, as do you when it becomes obvious that now is not a moment in time: it is eternity itself.

There are 42 stand-alone poems in the structure, because that is the answer to life, the universe and everything. The question is equally simple: "What do you get when you cross the devil with God?"

Add to that the two poems here and the one in Victory and you get 45, or part of the secret chord progression David played which pleased the Lord.

Each poem has 3 external links, which makes for 126 in total. Plus 2 in One to One; 1 in balance to Iron; 1 in moment to The Family of Imran; and 7 here. Excluding the links to the Qur'an in Victory, this comes to 137: the inverse of the fine structure constant, the dimensionless root of synchrony and the most likely means to realise in a reproducible fashion the unity of mind and matter.

Victory offers a few drops of the infinite ocean which is the Qur'an. Most translations are done by Yusuf Ali, with some from Dr Mustafa Khattab and Muhammad Shakir. I have linked to the 274 ayat or "signs" which spoke most directly to my heart.

I am finally out of words. Thank you for reading. I love you. We are all in love, infinitely.